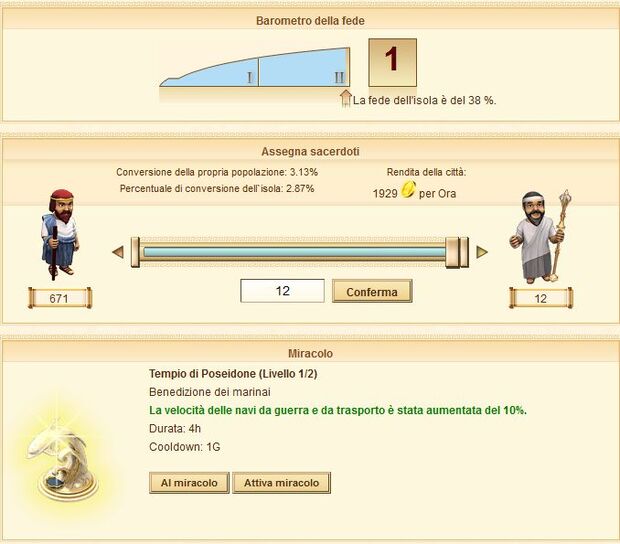 By looking at the wonder page of an island, one can see how many priests each player has, how much is the faith percent in his/her town population, and his/her island faith share. Faith does not have to reach 100% of the island population for the miracle to be triggered. Miracles can be triggered when the total island population faith reaches 20%, 40%, 60, 80%, and 100% according to the Faith Barometer level at the top of the wonder page.

It is noteworthy that faith is generated over a specific (unknown) period of time. This time is in opposite relationship with the number of of priests recruited. Therefore, the recruitment of more priests decreases the time required to generate faith, and the removal of priests decreases the amount of faith over a specific (unknown) period of time. Also, the upgrade of a Wonder opens the faith limit to reach the next level on the faith meter, as seen on the Wonder's page.

In an ideal world, every player will have one or more temples that are adequately expanded to allow recruiting priests enough to spread the faith to 100% of its town population, i.e. 1 priest for every 5 citizens. However, this is almost always not the case. There will be newbies on the island who need to research polytheism to have a temple and players not interested in faith, wonders or miracles.

Consequently, the spread of faith was designed in such a way that when a player generates faith that's more than their fair share (players who have a ratio of priests to town population more than 1:5), the extra faith generated by the efforts of the extra priests compensate for the lack of such at other towns. In some islands with 2 or 3 towns this can be the case where one player through spreading the faith to all of his town's population makes up for the lack of faith in 2 small towns with very few citizens and perhaps without temples or faith at all (see the math example below).

Wonders allow for Miracles to be triggered in Temples. A wonder is upgraded by donating luxury goods that are not found on that particular island. i.e. if you were on a crystal island, you can only donate sulfur, wine, and marble (not wood nor crystal). A wonder's upgrade (expansion) level determines the maximum effect of its miracle, irrespective of the island faith level. Wonders have only 5 stages of expansion. A Wonder's upgrade level is independent of the island faith level. A player can donate to upgrade the Wonder irrespective of having a temple, and therefore, without the ability to trigger the miracle.

A miracle can be triggered at a level from 1 to 5 depending on its wonder's upgrade level, and as described on its wonder's page. The Miracle Level (effect) is dependent on both the Wonder Upgrade Level (determines maximum effect) AND the island faith level (determines the actual effect the miracle will achieve). Consequently, even if faith was spread to all island inhabitants (100% island conversion), the miracle will only trigger with a maximum effect equal to the current wonder's upgrade level. For example if the island faith level is 45% and the wonder was expanded to level 2, the actual miracle effect will be level 2, or 40% on the faith meter scale.

The minimum faith level for any wonder is 20% of the total island population. Any player with a temple in a town on that island can activate the miracle from his/her temple on that island when the island faith level reaches the minimum level threshold. The effect is empire-wide for that player i.e. it will reach all towns of the player even those on distant islands. Each miracle has its own "cool-off" timer that must expire before it can be re-triggered. This cool off time is specific to the miracle and is listed on the wonder page.

It has been reported that when a player activates a miracle, it affects players on the same island, and the effect is empire-wide for them as well. However, this information has not been confirmed with actual active Ikariam players.

Temples are required to produce faith and trigger Miracles. If you don't have, or can't have, a temple, you're out of luck. If you have a temple and did not donate to the wonder or recruit priests and contribute to spreading faith in the island, and did activate the miracle from your temple; you are a "miracle leeche" and will upset some people. Get ready for the consequences (pillages).

A 20% island faith level is enough to activate a level 1 miracle.

A more realistic example: Suppose that an island has 3 towns:

The faith level of that island is:

Which is enough for player B and C to trigger the miracle from their temples at the minimum miracle effect level (player A does not have a temple).

The 5.7% extra faith generated by town C compensates for the total lack of faith in town A and the lack of 10% fair share faith in town B for a minimum level miracle effect.