A land battle will occur in either situation:

Battles are broken up into rounds. Each round lasts 15 minutes, and the battle will only end with one party ending victorious in any of the situations:

The beginning of the battle[]

The battle does not officially begin until one of the Walls possible breaches are destroyed, therefore bringing several siege weapons is highly advised. If the enemy has more units than their wall can garrison, the wall will not appear until the enemy's troop numbers have fallen below the garrison limit. Walls have defensive features, so can damage an army before any breaches have been achieved. There are some bits of a battle that need a slightly larger comprehension of the game, but it still is fairly simple. The main aim in a land battle is usually to breach the wall losing the least number of heavy, light and ranged units.

Morale is one of the main driving forces of a battle, affecting one of the three possible outcomes of the battle. When a battle starts, morale is at 100% for both sides. However, during the battle morale decreases by varying percentages(the standard is 10%) every round, therefore if no cooks are present, a battle can only last (usually) at maximum 10 rounds. Morale is affected by many things, including the amount losses, the presence of a town wall, army size differences, how many cooks there are in a battle, and how many allies/enemies are in the battle.

The attacking player might be forced to fight in the largest size battlefield format, regardless of the size of the town under attack. This happens only when the defending units' body count is more than the Garrison Limit of the town they defend. This has many strategic defensive advantages, to mention a few:

The size of the Town hall affects the size of the battlefield. With every advancement of battlefield, a larger amount of troops are deployed at once. The rest are all classed as reserves and will only come into battle to replace another unit who was killed. If the Heavy Infantry (Hoplites & Steam Giants) line is broken and no other Heavy Infantry units can replace it, other units from the Light Infantry and Long-Range Fighter categories will replace them, however they are will die faster and in much greater numbers than a standard Heavy Infantry unit. This means that, to make Light Infantry and Long-Range Fighter units do their jobs, you must first fill the Heavy Infantry spaces.

Bring enough fully upgraded Steam Giants or Hoplites, Swordsmen, Sulphur Carabineers, Mortars and lots of Auxiliary units to fill all the corresponding spots and have some extra in reserve, especially for the Sulphur Carabineers, which only have 3 rounds of ammo. The Heavy Infantry will create a very good defense, the Swordsmen will attempt to flank the enemies, successfully if the enemy has no light infantry. The Sulphur Carabineers will shoot the target with their Harquebuses, the auxiliary troops will heal the Heavy Infantry and feed all the troops, and, assuming there are no Balloon-Bombardiers, the Artillery units will be safe to destroy the Town walls.

Attacking a village with a simple army such as some spearmen, swordsmen, a few slingers, no rams, and maybe a cook with about 30 hoplites will probably be unsuccessful because Heavy Infantry and Artillery units are lacking. But let's say you're attacking with an army of 20 hoplites and several of the other types. Since a square of positioning takes 30 men max you will only be able to partially fill 1 square with your Hoplites. Soldiers from the other lines (Archers, Swordsmen etc) will fill the slots but will be quickly defeated.

If you want to attack a big town that you can't afford to fill its front battle line but you have confirmed that they don't have (or have very, very few) defenders in that town, just send your Light Infantry and Heavy Infantry units, in order to protect the Long-Range Fighter and Auxiliary units. This is also useful if your aim is not a serious fight but want to go there with a good battle plan. If you have no other options, sending just Light Infantry, Heavy Infantry and Artillery units should suffice.

Up to six formations can be positioned on a battlefield. The same formations on both sides of the battle shoot at the same time.

The individual formations and shot sequence on the battlefield are filled and shoot in the following order:

The battlefield background image will change depending on the size of the town you are attacking.

A town of Level 1 - 4 is classed as a Village. The smallest battlefield format allows the following:

Towns leveled 1 - 4 are too small to allow the maneuvering for Light Infantry units, therefore there are no slots for flanks.

Note:
If you have a lower level town and go over the garrison limit you will see this battlefield as well. 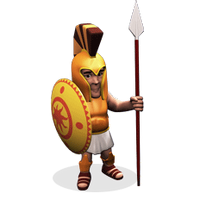 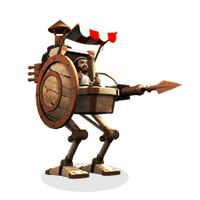 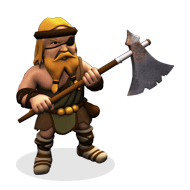 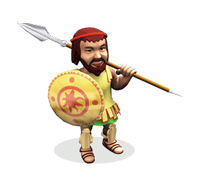 Long-Range Fighters attack your opponents front line. They occupy the long range battle line behind the front line. Long Range units also have a limited amount of ammunition, though they can share ammo with other Long Range units of the same type in the reserve. They will move to the front line if it starts to break. 30 of each Slingers and Archers comprise a battlefield unit, or 40 and 50 in the 2 largest battlefield sizes, but only 7 Sulphur Carabineers will completely fill a slot, except for the 2 largest battlefield sizes, which need 10 and 12 per slot. 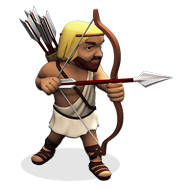 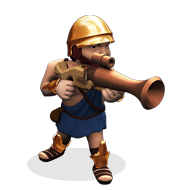 There is only 1 type of Fighter Pilot to occupy the Air Defense slot, the Gyrocopter. Gyrocopter can attack other air units, but can not attack any land units. A different number of Gyrocopters will fill a battlefield unit, according to the battlefield size. 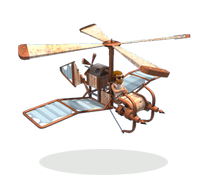 Artillery weapons are essential for breaking down a higher level Town wall, providing large amounts of attack power. They will first attack the opponents wall, if your opponent has no wall remaining, the damage will go to other front line units. It is important to note that if your opponents wall is partly destroyed, all the damage will go to the remaining wall segments. Additionally, once a Town wall becomes Level 24, Rams can not do any damage to it. Although Catapults can damage any known level wall, it becomes very slow at higher levels, so mortars are recommended. Artillery will never move to the front line, therefore the close range attack is useless or only used when they run out of munition. Each of these weapons take 6 units to fill a battlefield slot. 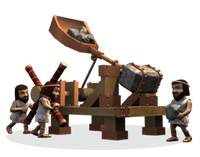 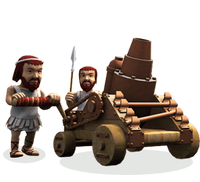 Auxiliary troops occupy the reserves. They will not engage in combat, and thus, the battle will end if an opponent has only auxiliary troops remaining. These troops are the only type of unit of which you may have an unlimited quantity. Doctors will restore health, and Cooks will restore morale. 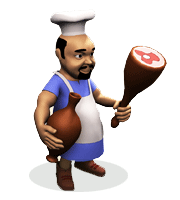 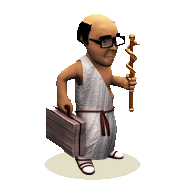