A unit is a soldier, support person or mechanical device used in land warfare.

Units are built (ie. trained) in the Barracks. Each unit type has a Minimum Barracks Level: only Barracks upgraded to or past that level can build those units. Further upgrades of the Barracks will significantly reduce the time to build the unit.

cost for training units can be reduced by a Carpenter; the

cost by a Firework Test Area; the

cost (for the Doctor) by an Optician and the

cost (for the Cook) by a Wine Press.

Unit upgrades can be made in the Workshop.

Land units can be deployed in other towns, yours or your alliance member's, and can be sent on missions from whichever town they are in. However, their upkeep cost is doubled if they are outside your towns, and while in transit. There are several researches you can finish to reduce your units upkeep costs. They are Maps (2% reduction), Code of Honor(Honour) (4% reduction, 6% total), Logistics (8% reduction, 14% total) and the Militaristic Future(s) (2% per level).

In Ikariam, battle units are divided into several classes. A unit class describes the job of its members on the battlefield.

Game description
The heavy infantry forms the backbone of every army. During close-combat it attacks opposing units at eye level or opposes the onslaught to protect the long-range and artillery units behind them.

WikIkariam's description
Heavy Infantry units are incomparably strong during direct close-combat and prevent your enemies from breaking through your front battle line. If you do not have enough heavy infantry units in the field, other units will have to take over the heavy infantry's job and and as general rule they do not have a chance in the battle.

He is born for battle. His trade is that of war. He only fights on the front line on the field. 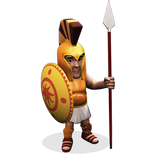 Hoplites are heavily armored spearmen from the towns' middle classes. They form the heart of every Greek army. In the so-called Phalanx formation they push forward in an unstoppable wall of spears and shields. 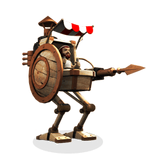 This powerful machine moves like a person on the battlefield, but has a superhuman hit strength. Stones, arrows and swords simply bounce off it. Woe betide anyone who dares to oppose it.

Game description
The light infantry consists of close-combat fighters, whose simple armour allows them to stay mobile. They support the flanks in battle, but can also help out in the close-combat line if not enough heavy infantry is available.

WikIkariam's description
Light Infantry units are lightly armored, mobile close-combat fighters, who protect your troops' flanks and try to circulate the enemy. If they are not intercepted by enemy light infantry, they attempt to attack enemy long-range fighters (unless they are needed at the front battle line after the wall is breached).

Sword fighters are usually barely armored and fight without shields to retain their mobility. Thus they can circulate around the immobile Phalanx formation and attack from the flanks.

Spearmen are conscripts from the rural population, that go into battle with light armour and basic spears. They do not usually have a chance against professional soldiers.

Game description
Long-range fighters gather behind the close-combat line. They then support the infantry from a safe distance and reduce the number of enemies while they are still on the way.

WikIkariam's description
Long-Range Fighter units try to attack the opponent's Heavy Infantry with their Long-Range Weapons. Long-Range Fighters are especially useful for defense, as they can fire from the walls. Typical long-range fighters usually cause just injuries that weaken the enemy's hit points but can be easily tended to by doctors. The worst thing that can happen to Long-Range Fighters is to have a run with light or heavy infantry units. Then they use their Close-Combat Weapons, and usually do not have a chance against Light Infantry units. 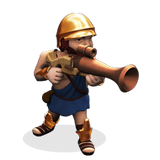 Shots from the sulphur carbine can penetrate even the most durable armour. However due to its sight line, only a single row of Sulphur Carabineers can fire while the rest has to reload. 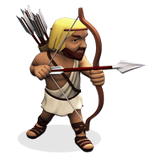 Slings are light and cheap weapons. Nevertheless, they are difficult to handle. On the battlefield they barely cause any damage to armored opponents, but at least their munition is readily available.

Game description
Artillery units aim at the walls of the town first. If these are already destroyed, the artillery fires their missiles on enemy close-combat fighters and cause a tremendous amount of damage.

WikIkariam's description
Artillery units try to demolish opposing cities' defense walls. They cause enormous damage, but they are also very expensive. If the artillery does not come across a wall, it generally fires into the rows of opposing Heavy Infantry. Those who are hit do not usually have a survival chance - however a large part of the damage that the artillery makes remains unused when they hit other units instead of walls. They always stand in artillery squares even if the front battle line isn't filled.

The mortar fires explosive shells against the walls of a besieged city. No building can withstand this destructiveness. However, the rare munition for it has to be brought along additionally, so shots fired need to be very well-targeted.

Catapults sling huge rocks against opponents' defense facilities and thus they can destroy even the strongest stone walls. However they are less useful for defense against enemy armed forces.

Powerful men swing the massive tree trunk against the enemy gates, until they give way and the men run for cover under the roof. It might only be useful for gates and walls, but at least it does not need any munition.

Game description
The bombers' job is to completely destroy the opposing artillery before it is used. If there are no more opponents in the artillery settings, the bombers attack the long-range battle line, followed by the close-combat line and finally the flanks.

WikIkariam's description
The Bomber unit is the Balloon-Bombardier. Bombers are aircraft's that have been constructed to attack enemy ground troops from the air. Their priority objective is the enemy's Artillery. Thus they can stop an attack before an attacker can seriously damage a wall. Bombers are not to be underestimated when fighting against regular ground troops. However, they are very expensive. If you want to use bombers, you should beware of enemy fighter pilots, as bombers do not have a chance in air combat. 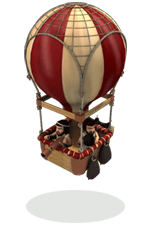 Our inventors have discovered that the sun is so hot because it attracts warm air. That is why a balloon filled with hot air also rises in direction of the sun and our soldiers can throw explosive shells down on our enemies from up there.

Game description
The air defense units have the ability to intercept bombers before they have reached their targets. This prevents too much damage from being caused. If no friendly bombers can be seen in the sky, the opponent's air defense is attacked. Other targets cannot be fought.

WikIkariam's description
The Fighter Pilot unit is the Gyrocopter. Fighter pilots are aircraft's that specialize in fighting against flying opponents. They cannot attack any surface units and do not ascend if the enemy does not have any air units. Fighter pilots are only there to safeguard armies against air attacks or to clear the path for their own bombers.

A novel flying machine that is fast, versatile and not dependent on the direction of the wind - we can hunt cowardly enemies that want to attack us from the skies with it!

WikIkariam's description
Support units can significantly influence the battle outcome, without having to fight themselves. Cooks and Doctors fall into this group. Doctors can recover some of the hit points of the Human units that were hit. Machines do not recover any hit points from the Doctors. Cooks can improve your soldiers Morale. Every Cook present can restore some of the troops morale points. 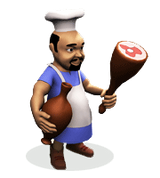 Your army's cooks know exactly how to give new courage to the warriors and heroes in the encampment: A glass of wine and a stew, just like mum used to make! If they take the evening to remember what they are fighting for, enemies will find it very hard to wear them down. 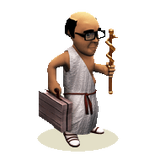 These Doctors have voluntarily enlisted to help tend to the wounds of those on the battle front. They can remove arrow heads, bandage up sword wounds and have enough ice available for soldiers' heads should enemies attack with slingshots.

Walls take the position of the close-combat line when defending a town. The strength of the wall and the weapon systems as well as the health points of the wall depend on the expansion level (see Buildings: Wall). In most cases the wall can only be penetrated by artillery units. While parts of a wall are still standing, a flank attack against the town is not possible. As soon as the attacker has destroyed a piece of the wall (so has 'breached' the wall) the defending units move up into the gap to close it. If they manage to destroy all parts of the wall, the flanks will be available again. The wall will be completely repaired once the battle is over.

The Barbarian-Axe Swinger is here to help players practice their battle skills while they are still fairly new to the game. 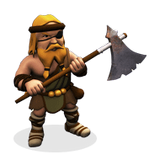 The main barbarian battle troops are terrifying warriors who throw themselves into battle with a wild roar and ensuing chaos. However, they barely have a chance against the disciplined Greek Phalanxes with their primitive armor.

Retrieved from "https://ikariam.fandom.com/wiki/Units?oldid=124109"
Community content is available under CC-BY-SA unless otherwise noted.